Beware of Scrooge Syndrome on the 8th Day of Christmas

I believe in Santa Claus.

Always have and always will.
Like my mother and grandmothers before me...
Santa is real. 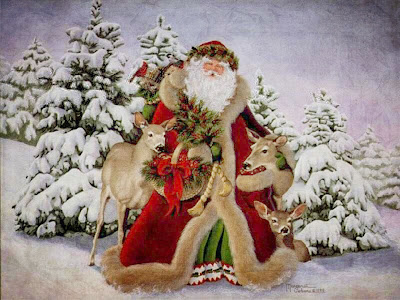 It's strange but true:
some people don't believe.
It's hard to explain why,
but when a person stops believing,
he begins to suffer from

Here are the symptoms:

While it is true that Scrooge Syndrome can develop in both males and females, it most often occurs in males. This could be a result of a male's minimal involvement in merriment activities such as decking the halls and such. Complaining about putting up lights is a sure sign of the onset of this syndrome.

If someone you know is developing this malady, warn them quickly and then give them a good healthy dose of Christmas cheer before it's too late. (Singing Jingle Bells three times in a row is a quick remedy for some, but for others it may drive them further into the illness.)  My advice is to tread lightly among the non-believers.  Some may be too far gone to fix. One should know that it has been documented that non-believers die much younger than believers.


It is sad but true that Scrooge Syndrome can begin to develop as early as ten years old. It is thought that perhaps this happens because of the over abundance of well meaning but fake Santas flooding our shopping malls.

*Research for this post has been gathered from The Santa Claus Book by Alden Perkes. Ph. D. S. who happens to be the world's leading authority on Santa Claus; and from personal experience of the author of this post.

Tomorrow's post will share pointers
on how to spot a fake Santa Claus.
This post will be most beneficial to those young males
who are most at risk of contacting
Scrooge Syndrome.