Butterfly Dreams Finale: Dancing all the way to Mexico!

We've been blessed to nurture tiny caterpillars with voracious appetites as they grew bigger everyday.  We've been amazed as they magically transformed into Chrysalis and then became Butterflies.  But of all the wonders we've experienced with these amazing little creatures, nothing can compare to seeing them spread their fragile wings and dance amidst our flowers... finally fulfilling the measure of their creation. 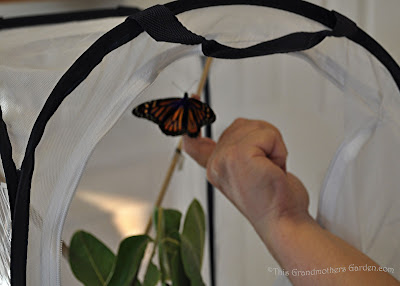 This is Primera, the first of our Butterflies to emerge from its Chrysalis.
What a thrill it was to slide my finger next to her tiny little legs
to coax her to step onto my hand
to carry her out to our gardens. 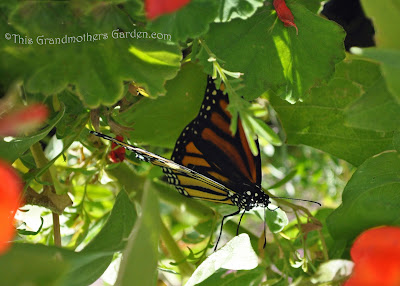 She proved to be the most timid of our royal treasures,
content to hide within the leaves for awhile... 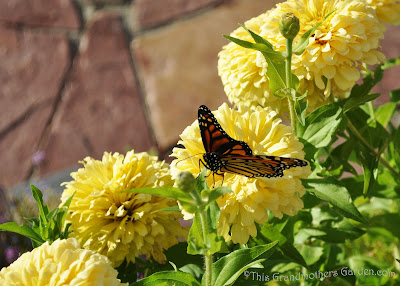 before climbing upwards towards the Zinnia blossoms
where she could soak in the warmth of the sun. 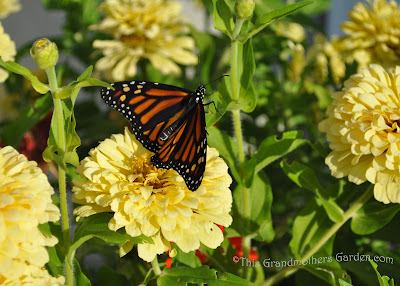 When she sensed it was time to fly...
off she went into the sky.
I searched for her in my camera lens, but soon realized it was best
just to watch her dance
as she would soon disappear from my view. 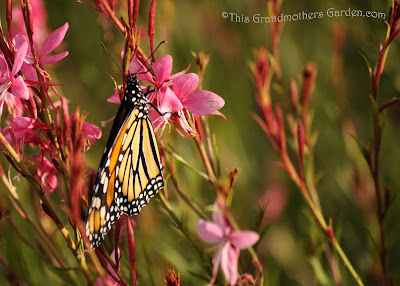 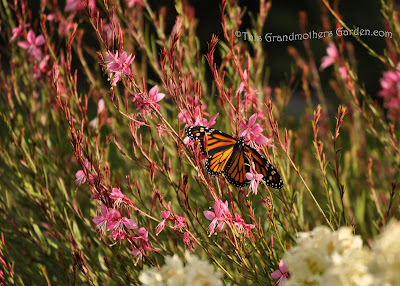 Segunda immediately flew from the blossom we placed her on
and chose instead to rest
on 'Passionate Blush' Gaura. 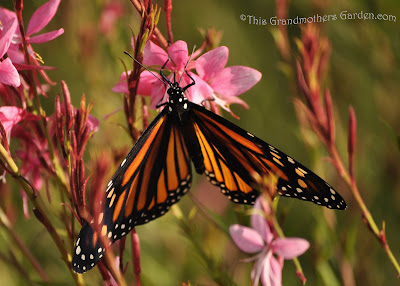 She entertained us with her beautiful wings
as she fanned them politely for several minutes before she, too, flew off to dance in the sky. 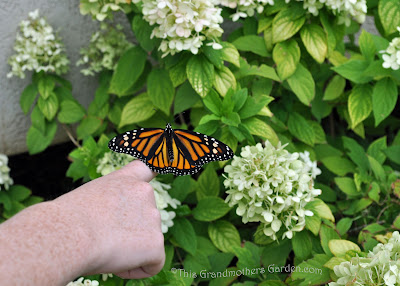 Within a few more days, Tercera, our third  Butterfly emerged.
My 16 year old daughter had the honor of escorting Tercera
to a 'Limelight' Hydrangea in our gardens. 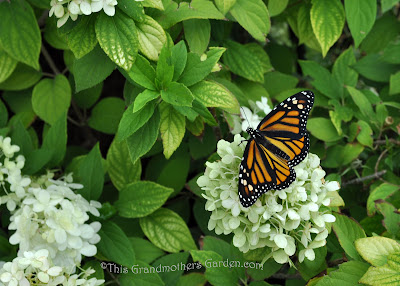 Tercera enjoy the photo shoot immensely
and posed like a royal princess for us. 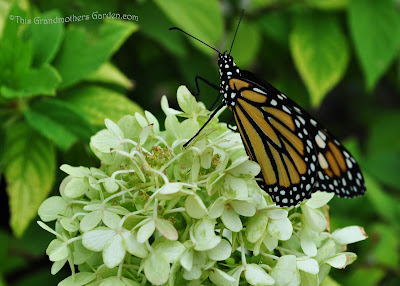 My Fashion Diva daughter's influence surely must have influenced  her
as she allowed us to capture her image in several settings... 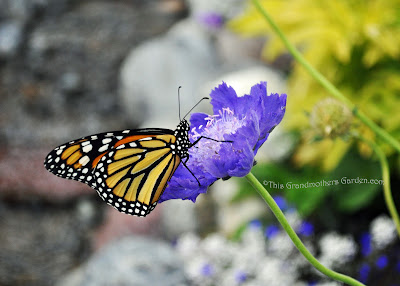 Scabiosa 'Butterfly Blue' was her favorite... and ours! 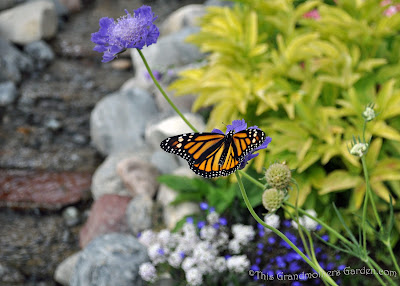 Tercera soon tired of all the attention and fluttered softly into the skies.

We had such fun with her... she was indeed the most delightful. 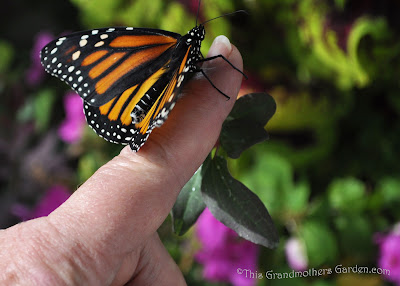 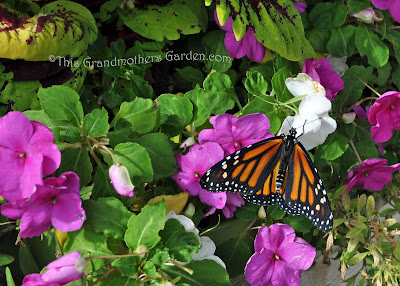 She seriously sat here in the impatiens and Coleus
for the longest while. 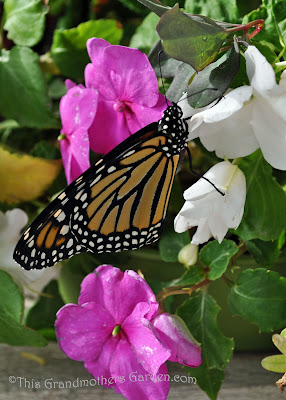 The morning was overcast without a bright sun.
and when she finally flew.... 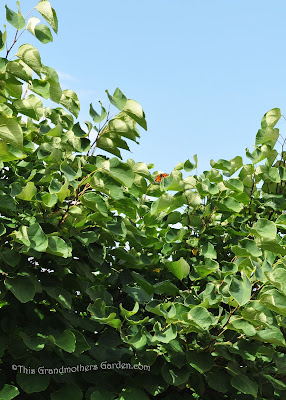 it was up to the tippy top of the Redbud tree above her.
There she sat for a very long time...
until the sun came out from behind the clouds
and warmed her wings...
and then she was off!

Quinta and Sexta were our fifth and sixth Butterflies to emerge.
They were our only male Monarchs
as identified by the single black dot on each of the hindwings.

Together they hunted for the perfect spot
and when Quinta dropped into J formation,
Sexta tried relentlessly to nudge him out of his sleepy state...
to no avail, of course.

Soon he snuggled up next to Sexta
and dropped into his own J formation... 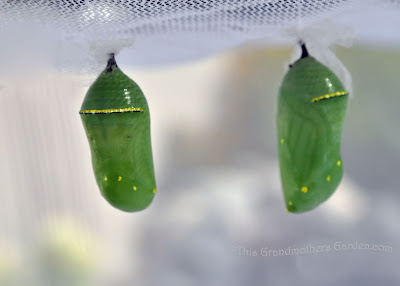 and the following morning they were both Chrysalis. 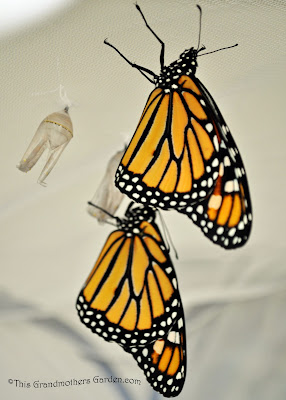 Ten days later, Quinta and Sexta emerged
within an hour of each other. 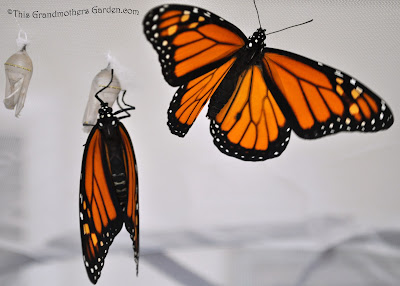 And the very next morning, it was time to release them.

They have a very long journey ahead of them
as they make their way to Mexico. 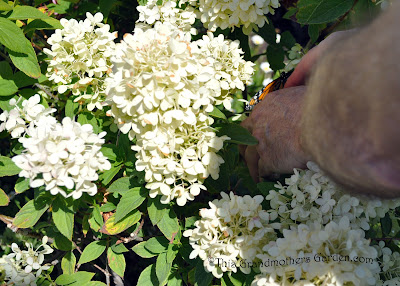 Can you see Quinta? 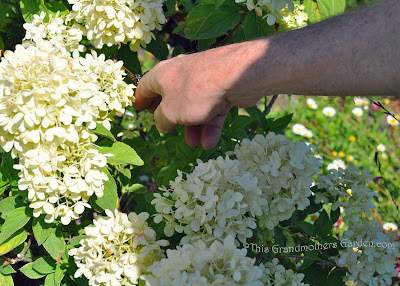 He's in there, I promise!
Look a little harder. 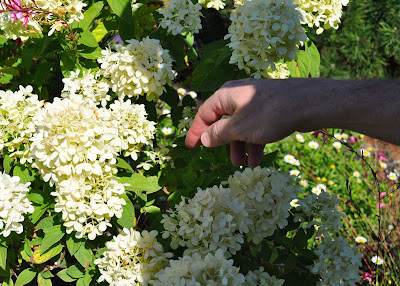 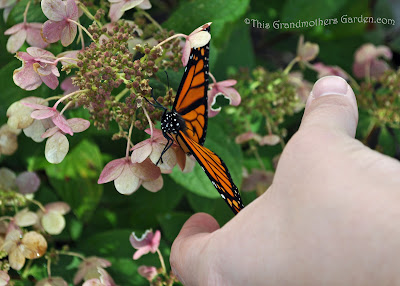 Sexta was released seconds after Quinta.
Our intention was for them to leave together,
but Quinta just couldn't wait. 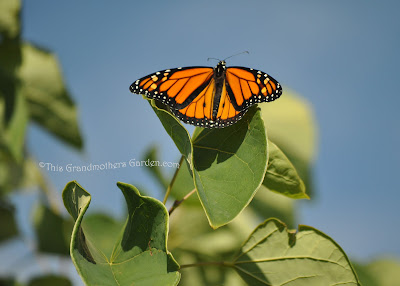 He quickly floated to the top of the Redbud
(that seems to be a favorite stopping spot)
surveyed the sights... 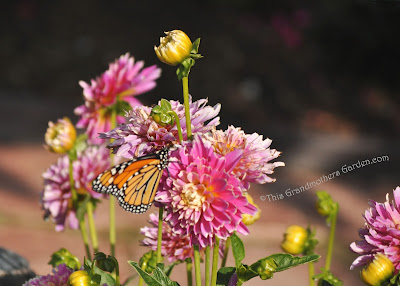 and then gracefully floated back towards me
landing on a clump of dahlias.
He stayed just long enough for me to snap a few pictures...

and then he too was off to dance in the warmth of the sun.


They were so-o-o ready to fly
and it was a perfect day for fluttering.

Dance sweet Butterflies...
all the way to Mexico.

So that's the end of my Butterfly Dreams...
for this season at least.
I've learned a great deal as I cared for these little creatures...


♥ ♥ ♥
If you've missed any of this series of posts
of my journey with Monarchs,
click on "Older Post" at the bottom of each page.