The Sleeping Giant... Time to Go to Work

We've known for some time this was going to happen, just didn't know it would be here so soon. 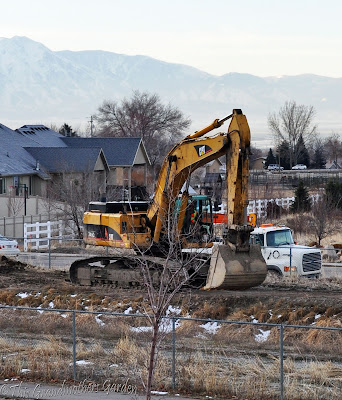 The sleeping giant awoke.
Part one of this story was posted here.. 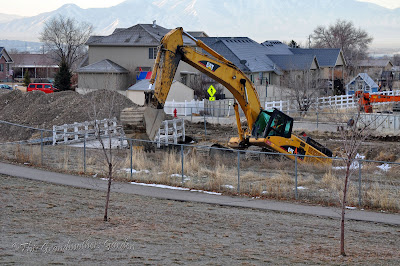 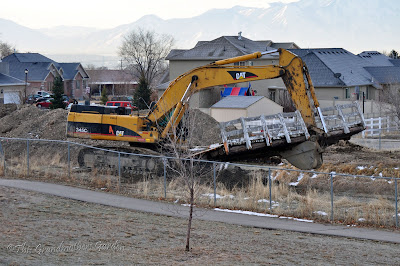 I watched as he ate the bridge.
Nothing but rubble left within 10 minutes. 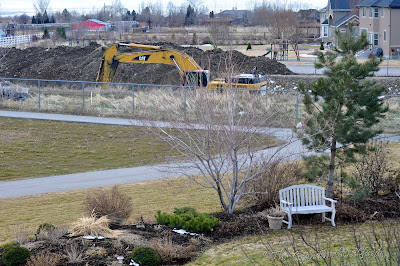 This is how it all looked when I left my office window perch.
Imagine me with the screen off the window, hanging out with my camera and pink pj's.

Today the dirt piles extend well beyond my view. I must admit feeling a bit melancholy as I watched that bridge come down. We've been looking at that bridge for almost eight years. But the project is finally becoming reality.

Adjacent to our property is the Provo Reservoir Canal. While the water isn't within our view unless we walk the trail adjacent to it, we've delighted in the wildlife the water has beckoned. We have known since we first moved here that someday that canal would be covered. Someday has finally come.

"The Provo Reservoir Canal, also known as the Murdock Canal, is 21 miles long and carries water from the mouth of Provo Canyon to the Point of the Mountain. It is one of the main water delivery arteries to the Wasatch Front and is the largest canal in Utah County.

Enclosing the canal:
• Provides greater public safety
• Improves water quality
• Conserves approximately 8,000 acre-feet water per year
• Provides instream flows to help with the recovery of the endangered June sucker
• Allows for the development of a recreational trail along the enclosed canal

The canal will be enclosed with 126-inch steel pipe. Just one ring of this pipe weighs almost 1,000 pounds. Imagine trenching and connecting 21 miles of giant pipe and snaking it through a heavily populated area and you start to get an idea of the enormity of this project, which will have the capacity to carry over 400 million gallons of water every day. Wow, now that’s a lot of water!"

This project, while talked about for years, will be completed in the Spring of 2012, all 21 miles of it. The completion will bring wonderful improvements. It's actually quite nice to have a front row seat to all of the excitement.


Yesterday late afternoon I was looking out the window at the site, no workers or machines in sight, they all had moved well down the road from my view. Quite suddenly I saw our two ducks, the same ducks in my mind that we've have enjoyed watching since we first moved here. They always fly together and land in the canal just past my thinking spot each Summer's night at dusk. This was my first sighting of them since last Fall. I watched as they flew east along where the canal once was for as long as I could see them. I wondered what they were thinking as they searched for their nesting place but only saw miles of covered pipline. Their nesting place has been destroyed. I felt gratitude that it wasn't quite Spring yet when their lives would be a flurry with nest building and laying eggs. 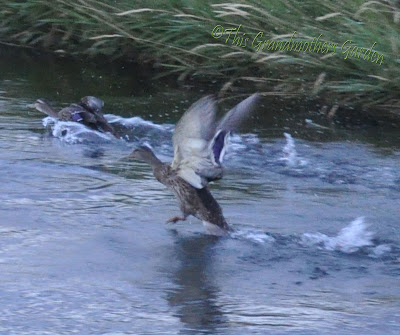 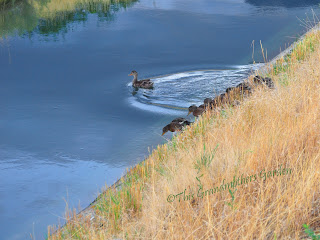 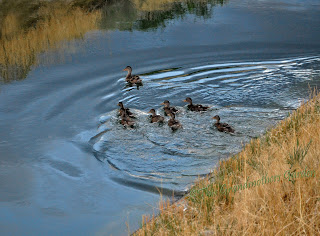 Last Spring I took pictures of the ducks and their babies in that canal. Did I know that would be the last time they would ever nest there? I'm sure they will find other places to nest, nearby there are several, but I will miss them. I wonder about the other little creatures along this 21 mile stretch that once called this area home. Where will they live? Did they have time to leave before the sleeping giant arrived?

Next Spring we will have a new nature trail to enjoy.
That will be nice... but I'll still miss my ducks.